Adenomyosis (pronounced A – den – oh – my – oh – sis) is a medical condition characterized by the presence of ectopic glandular tissue found in muscle. The term adenomyosis is derived from the terms adeno- (meaning gland), myo- (meaning muscle), and -osis (meaning condition). Previously named as endometriosis interna, adenomyosis actually differs from endometriosis and these two disease entities are found together in only 10% of the cases.

It usually refers to ectopic endometrial tissue (the inner lining of the uterus) within the myometrium (the thick, muscular layer of the uterus). The term “adenomyometritis” specifically implies involvement of the uterus.

The condition is typically found in women between the ages of 35 and 50. Patients with adenomyosis can have painful and/or profuse menses (dysmenorrhea & menorrhagia, respectively). However, because the endometrial glands can be trapped in the myometrium, it is possible to have increased pain without increased blood. (This can be used to distinguish adenomyosis from endometrial hyperplasia; in the latter condition, increased bleeding is more common.)

Adenomyosis may involve the uterus focally, creating an adenomyoma. With diffuse involvement, the uterus becomes bulky and heavier.

Some women with adenomyosis do not experience any symptoms, while others may have severe, debilitating symptoms. The endometrial implants that grow into the wall of the uterus bleed during menstruation (the same as endometrial tissue bleeds) and are discharged vaginally as menstrual bleeding. The vaginal pressure can be severe enough to feel like the uterus is trying to push out through the vagina, like the first stage of labor when the baby’s head pushes into the cervix.

Adenomyosis is associated with an increased incidence of preterm labour and premature rupture of membranes.

A review in 2012 found no evidence that adenomyosis should be detected and treated in patients who seek assisted reproduction.

The cause of adenomyosis is unknown, although it has been associated with any sort of uterine trauma that may break the barrier between the endometrium and myometrium, such as a caesarean section, tubal ligation, pregnancy termination, and any pregnancy. It can be linked with endometriosis.

Some say that the reason adenomyosis is common in women between the ages of 35 and 50 is because it is between these ages that women have an excess of estrogen (Estrogen Dominance). Near the age of 35, women typically cease to create as much natural progesterone, which counters the effects of estrogen. After the age of 50, due to menopause, women do not create as much estrogen.

Adenomyosis correlates with abnormal amounts of multiple substances, possibly indicating a causative link in its pathogenesis, although correlation does not imply causation:
Endometrial IL-18 receptor mRNA and the ratio of IL-18 binding protein to IL-18 are significantly increased in adenomyosis patients in comparison to normal people.
Leukemia inhibitory factor is dysregulated in the endometrium and uterine flushing fluid of women with adenomyosis during the implantation window. 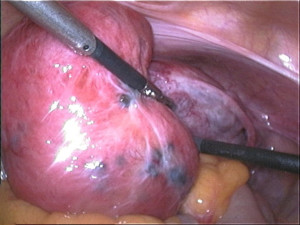 The uterus may be imaged using ultrasound (US) or magnetic resonance imaging (MRI). Transvaginal ultrasound is the most cost effective and most available. Either modality may show an enlarged uterus. On ultrasound, the uterus will have a heterogeneous texture, without the focal well-defined masses that characterize uterine fibroids.

MRI provides better diagnostic capability due to the increased soft tissue differentiation, allowable through higher spatial and contrast resolution. MRI is limited by other factors, but not by calcified uterine fibroids (as is ultrasound). In particular, MRI is better able to differentiate adenomyosis from multiple small uterine fibroids. The uterus will have a thickened junctional zone with diminished signal on both T1 and T2 weighted sequences due to susceptibility effects of iron deposition due to chronic microhemorrhage. A thickness of the junctional zone greater than 10 to 12 mm (depending on who you read) is diagnostic of adenomyosis (

MRI can be used to classify adenomyosis based on the depth of penetration of the ectopic endometrium into the myometrium.
Exact diagnosis of adenomyosis only possible in posthysterectomy specimen.

Conservative treatment often consists of anti-inflammatory medications, such as ibuprofen or other NSAIDs. Hormonal manipulation may include combined or progestin-only oral contraceptives as well as other options such as transdermal patches and progesterone-releasing intrauterine devices. Hormonal suppression may be used in the form of danazol or a gonadotropin-releasing hormone agonist. These medications simulate menopause, a period in which adenomyosis often resolves naturally.

Based on one’s desire for future fertility and the size of the lesion, surgical options may include endometrial ablation, laparoscopic myometrial electrocoagulation and adenomyoma excision. These have demonstrated positive results in several studies, though long-term data is lacking. A non-surgical procedure, uterine artery embolization may also be used to block the blood supply to the ectopic endometrium, selectively killing the problematic tissue. Hysterectomy may be warranted in some cases where fertility is not desired, and is the only definitive treatment for the disease.

It is advocated that adenomyosis poses no increased risk for cancer development. However, both entities could coexist and the endometrial tissue within the myometrium could harbor endometrial adenocarcinoma, with potentially deep myometrial invasion. As the condition is estrogen-dependent, menopause presents a natural cure. Patients with adenomyosis often also have leiomyomata and/or endometriosis.

Jolene is a parenting, education, homeschool, lifestyle and mental health blogger who hails from Johannesburg, South Africa. She is a wife, and mom of 4 children aged 18, 13, 11 and 8. Her family are all avid readers and love spending time together at the dance studio, tennis courts, Scouts Hall and watching movies.