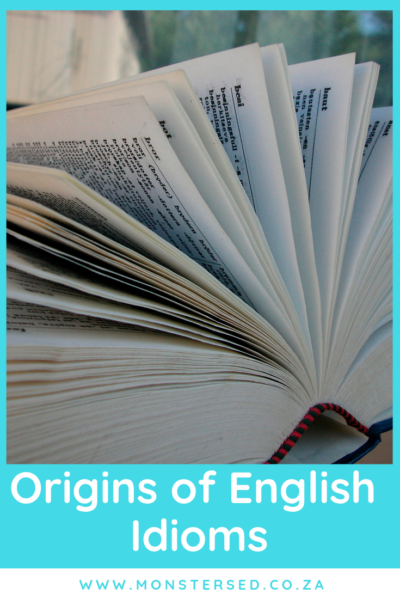 Have you ever wondered what the origins of English idioms are? I’ve spent quite some time researching the 10 most commonly used phrases and have been quite surprised at how these came about.

An idiom is a word or, more commonly, a phrase in which the figurative meaning is different than the literal meaning of the grouping of words. There are approximately 25,000 idioms in the English language alone.

To turn a blind eye

Meaning: To refuse to acknowledge a known truth

Origin: The origins of this phrase are disputed, it is commonly accepted that turning a blind eye comes from a comment made by British Admiral Horatio Nelson. In 1801 he led the attack alongside Admiral Sir Hyde Parker in the Battle of Copenhagen. Nelson was blind in one eye. Parker communicated to Nelson at one point, via flags, that he needed to retreat and disengage. Nelson, however, was convinced that he could prevail if they pushed onward. Nelson then, holding the telescope to his blind eye, pretended not to see the signal—making a sly comment to a fellow officer about reserving the right to use his blind eye every now and again.

Play it by ear

Meaning: Playing something by ear means that rather than sticking to a defined plan, you will see how things go and decide on a course of action as you go along.

Origin: This saying has its origins in music, as “playing something by ear” means to play music without reference to the notes on a page. This sense of the phrase dates back to the 16th century, but the present use only came into being in mid-20th century America, primarily referring to sports. These days, the expression has lost this focus on sports and can be used in any context.

Straight from the horse’s mouth

Meaning: Getting information directly from the most reliable source

Origin: This one is said to come from the 1900s, when buyers could determine a horse’s age by examining its teeth. It’s also why you shouldn’t “look a gift horse in the mouth,” as inspecting a gift is considered bad etiquette.

Meaning: To leak a secret

Origin: This one’s a bit tricky, as there is no clear-cut answer. The consensus is, however, that this is most likely derived from an ancient Greek voting process, which involved beans. People would vote by placing one of two colored beans in a vase, white typically meaning yes and black or brown meaning no. This meant that should someone spill the beans, the secret results of the election would be revealed before intended. Hence, spilling the beans is related to revealing secret information.

Origin: The origins of this bizarre phrase are obscure, though it was first recorded in 1651 in the poet Henry Vaughan’s collection Olor Iscanus. Speculation as to its origins ranges from medieval superstition to Norse mythology, but it may even be a reference to dead animals being washed through the streets by floods.

Meaning: teasing someone, usually by lying in a joking manner

Origin: Although pulling someone’s leg is all in good fun nowadays, it originally described the way in which thieves tripped their victims to rob them.

Beat around the bush

Meaning: To circle the point; to avoid the point

Origin: This common phrase is thought to have originated in response to game hunting in Britain. While hunting birds, participants would beat bushes in order to draw out the birds. Therefore, they were beating around the bush before getting to the main point of the hunt: actually capturing the birds.

Can’t do something to save my life

Meaning: It’s typically used in a self-deprecating manner or to indicate reluctance to carry out a task requested of one.

Origin: Anthony Trollope first used this expression, in 1848 in Kellys and O’Kellys, writing, “If it was to save my life and theirs, I can’t get up small talk for the rector and his curate.”

Barking up the wrong tree

Origin: Likely referring to hunting, this saying explains when a dog would literally bark at the bottom of the wrong tree after the prey in question moved to the next branch.

Meaning: We use this expression to refer to someone who criticises someone else, for something they they themselves are guilty of.

Origin: First used in the literature of the 1600s – notably Don Quixote by Cervantes – this expression has its origins in the Medieval kitchen, when both pots and kettles were made from sturdy cast iron and both would get black with soot from the open fire.

Jolene is a parenting, education, homeschool, lifestyle and mental health blogger who hails from Johannesburg, South Africa. She is a wife, and mom of 4 children aged 18, 13, 11 and 8. Her family are all avid readers and love spending time together at the dance studio, tennis courts, Scouts Hall and watching movies.